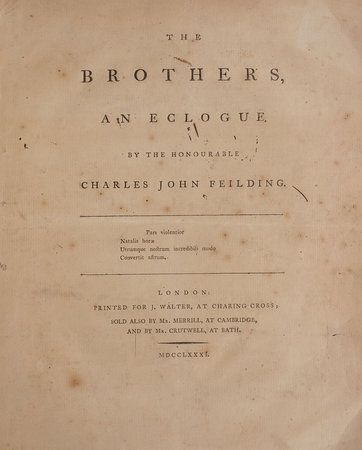 FEILDING, Charles John. ~ The Brothers, an Eclogue. London: Printed for J. Walter... sold also by Mr. Merrill, at Cambridge, and by Mr. Crutwell, at Bath. 1781.

First edition of a pastoral meditation on peace and war, dedicated to the author’s brother, Viscount Feilding. ‘These two brothers seems a modern Amphion and Zethus [Horace]. Of the poem, in the language of Dr. Johnson, “it is sufficient blame to say, that it is a pastoral.” Yet, as Pope said of his own pastorals, we think it “something better;” and of the genius of this young writer, from this, and other fugitive pieces that we have seen, we have a very advantageous opinion, as well as of his heart. The fraternal affection which inspires this poem... is a new subject for an Eclogue... The two Brothers, under the names of Damon and Dorylas, are the interlocutors, enlarging on the praise of their respective pursuits, Peace and War, the pastoral (or learned), and the military life’ (Gentleman’s Magazine).

Feilding was a cousin of novelist Henry Fielding and this is his only separately published work. Among the papers relating to Garrick and his circle at the Folger Library is a 76-line autograph poem by him: ‘An elegy to the memory of David Garrick’. Jackson p. 85.