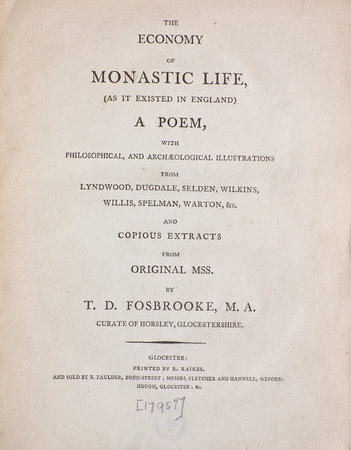 Sole edition, though there may be two issues not clearly recorded: this copy has a short errata list to the verso of p. 112, where ESTC reports a ‘slip’ inserted after p. 112. This is an interesting fusion of poetry with serious historical enquiry, presented with copious footnotes. Besides a small collection of poems published while at Oxford (1786) it is the author’s earliest major work, the first of several well-regarded antiquarian studies. It was on the strength of its favourable reviews that Fosbrooke was elected to the Society of Antiquaries in the year of publication. The dedication reads ‘The work is inscribed from motives of gratitude to Edw. Jenner, M.D. F.R.S. &c. A gentleman of eminent knowledge in the art of medicine, and the history and philosophy of nature.’☺ Jackson, p. 207 (suggesting 1796 as date of publication, ESTC gives ?1795); Johnson, 337.