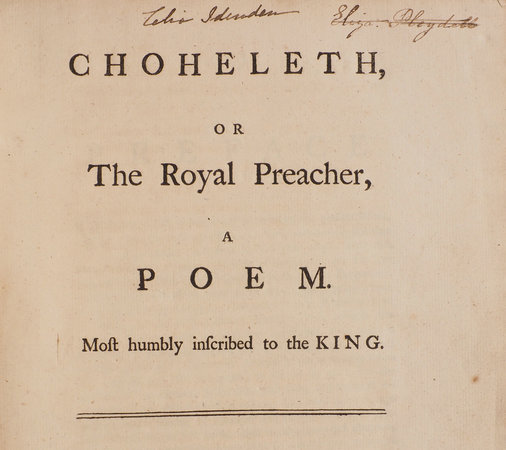 [FURLEY, J. Dennis]. ~ Choheleth, or the Royal Preacher, a Poem. Most humbly inscribed to the King. London: Printed for the author, and sold by W. Johnson. 1765.

First edition, a Miltonic verse paraphrase of the book of Ecclesiastes, much admired by John Wesley, who called it ‘a surprising poem’ that showed greater understanding of the ‘difficult expressions and the connection of the whole’ better than any other ancient or modern writer. ESTC notes: ‘Sometimes ascribed to Walter Braddie or Brodick; also to N. Higgins, who merely re-edited the work (Halkett and Laing, vol. I, 330)’. Further editions appeared in 1768 and 1778. ESTC: BL, Cambridge (UL and Trinity), Birmingham, NLS, Senate House, Rylands, Winchester College, Columbia (2), Huntington, Princeton, Texas and University of Sydney.