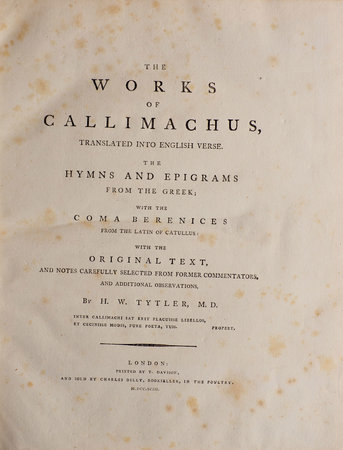 CALLIMACHUS. ~ The works of Callimachus, translated into English Verse. The Hymns and Epigrams from the Greek; with the Coma Berenices from the Latin of Catullus: with the original Text, and Notes... by H. W. Tytler,... London: Printed by T. Davison, and sold by Charles Dilly. 1793.

Sole edition of this translation. Henry Tytler (1752/3-1808, younger brother of James ‘Balloon’ Tytler) was a Scots physician and translator. ‘His model was avowedly Pope's Iliad, in which he had steeped himself by way of preparation; he rendered Callimachus's Hymns and Lock of Berenice into heroic couplets, the epigrams into rhymed tetrameters’ (Oxford DNB). There is a 6-page list of subscribers, almost all Scottish. According to the preface by the Earl of Buchan, ‘the translations now offered to the public are the first from a Greek poet that have been published by a native of Scotland in the English language.’ Not in Jackson.