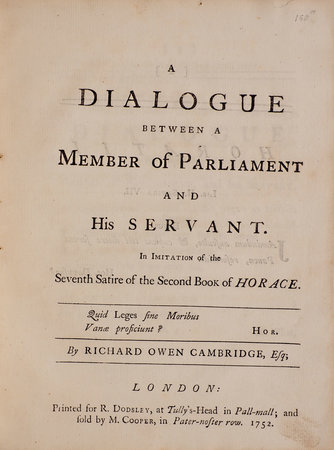 < >
on corrupt and hypocritical M.P.s

CAMBRIDGE, Richard Owen. ~ A Dialogue between a Member of Parliament and his Servant. In Imitation of the Seventh Satire of the Second Book of Horace. London: Printed for R. Dodsley... and sold by M. Cooper. 1752.

First edition, a neatly prescient attack on corruption among Members of Parliament, in imitation of the Seventh Satire of the Second Book of Horace, with parallel Latin and English text. ‘Only superficially is it a dialogue: the servant manages to keep the recipient of his harangue almost speechless in the course of his enumeration of the cynical practises of the average M.P.... The Dialogue is a pleasant piece, jocular rather than biting...’ (Altick, pp. 120-1). Among his many complaints, the servant berates the M.P. for his hypocrisy in agitating for stricter adultery laws while hiding under his mistress’s bed and for proposing stricter regulations on gin drinking while allowing gambling at White’s. Richard D. Altick, Richard Owen Cambridge: belated Augustan (Philadelphia, 1941).