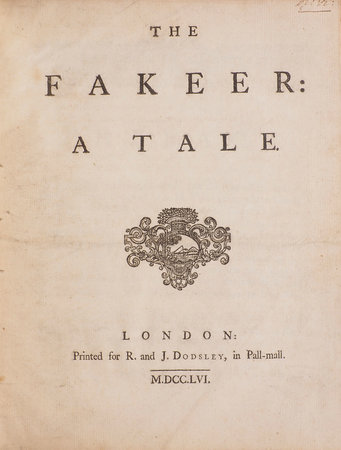 Sole edition of the last of Cambridge’s short pieces, an oriental tale fusing Indian and Chinese motifs in a critique of the vagaries of fame. ‘Cambridge tells us that its plan was “borrowed from M. Voltaire, who evidently took his hint from a passage in Pere le Comte’s History of China,” which he quotes at the head of the poem’ (Altick, p. 126). It was savaged by the newly-established Critical Review (’It would take up too much time and space... to enter into the demerits of so poor a performance...’) clearly out for the blood of a well-established and comfortably-off gentleman poet. Richard D. Altick, Richard Owen Cambridge: belated Augustan (Philadelphia, 1941).