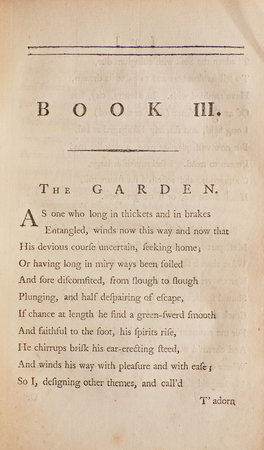 First editions of both parts, uniformly bound, of works subsequently issued together. ESTC notes that the preface to Poems by John Newton (Cowper’s Olney Hymns collaborator) printed to accompany this edition was suppressed on publication. It nonetheless appears in a good number of copies and is present in ours.

The Poems were not immediately successful, though Cowper received compliments on them from Benjamin Franklin, who read them at Passy. It was the 6000-line The Task published three years later which secured Cowper’s reputation as a major poet. ‘The Task... was published early in August 1785. It was an immediate critical and popular success, and its popularity continued to grow. Its condemnation of slavery and advocacy of the humane treatment of animals were slightly in advance of changes in public opinion, so that the poem became more representative of its readers' views as time went by. Its attacks on aristocratic immorality and conspicuous consumption chimed in with William Wilberforce's campaign, initiated by the royal proclamation of 1787, to recall the upper classes to their social and religious responsibilities. Like its evangelical Christianity, its patriotic zeal against everything French gained fresh significance in the 1790s, when Britain went to war with the godless republicans of revolutionary France. Its evocations of landscape and the domestic life have proved permanently appealing. Above all, Cowper demonstrated in The Task that blank verse could render every topic from the most mundane aspects of gardening to the day of judgement—a lesson not lost on the next generation of poets (Oxford DNB). Jackson, p. 96 and 119; Rothschild 681; Russell, A Bibliography of William Cowper to 1837 (Clarendon Press, 1963) 68 and 69.