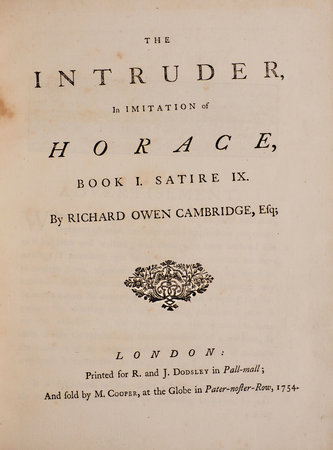 Sole edition. Another Horatian imitation, The Intruder takes as its source satire ‘The Impertinent’ (Book I, Number IX, earlier used by Johnson in the Poetaster). ‘It is a skit describing the poet’s being bothered by a talkative, pestiferous coxcomb while he is out walking. The broadest hints are of no avail in getting rid of the nuisance. Finally, however, a chance allusion to “the Sabbath of the Jews” as they are passing through Billingsgate leads the fishwives to take the coxcomb for an Israelite. While he is being severely belaboured by the denizens of the neighbourhood—for these were the days of the anti-Jew bill—his late victim makes his escape... The Monthly Review found in his handling of his model a nice moderation, neither flattening the humor by too strict an adherence to the original nor deviating from it so far as to obscure Horace’s own plan’ (Altick, pp. 123–4). Cambridge had published another imitation of Horace, A Dialogue between a Member of Parliament and his Servant (Book II, Satire 7), in 1752. Richard D. Altick, Richard Owen Cambridge: belated Augustan (Philadelphia, 1941).