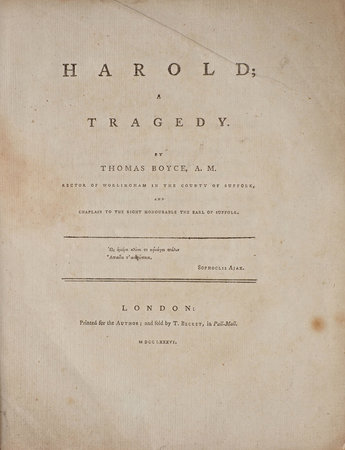 Sole edition, a poetical drama on the subject of the Norman Conquest. ‘This drama, as we are informed in the preface, was finished before Mr. Cumberland’s tragedy on the same subject was performed at Drury-Lane. Wishing to avoid a comparison with a dramatic veteran, Mr Boyce withheld his piece from the public for some years. Mr. Cumberland’s “Battle of Hastings” is certainly one of the worst tragedies in the English language. The Norman conquest of England in the reign of the unfortunate and criminal Harold forms a bad subject for a tragedy; and Mr. Boyce has also failed...’ (English Review).

Boyce, a Norfolk-born clergyman was educated at Cambridge (Gonville and Caius College), matriculating in 1750. From 1780 until his death he was rector of Great Worlingham, Suffolk, and chaplain to the earl of Suffolk. Harold, which was never acted, is dedicated to Lady Beauchamp Proctor of Langley Park (Norfolk). Jackson, p. 123.