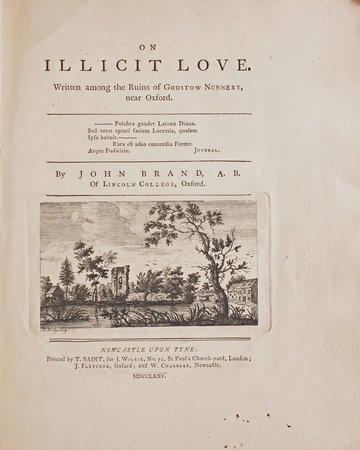 < >
WITH A BEILBY VIGNETTE

Sole edition of a poem on the love of Henry II and his mistress Rosamund Clifford (’Fair Rosamund’) with engraved title vignette by Ralph Beilby of Newcastle (Thomas Bewick’s first master).

‘Godstow is at present a Ruin on the Margin of the Isis, at a small distance from Oxford. It was formerly a House of Nuns, famous perhaps on no account so much as for having been the Burial-place of Rosamond, daughter of Lord Clifford, the beautiful Paramour of Henry the Second. This Monarch is said to have built a Labyrinth at Woodstock to conceal her from his jealous Queen, who, during his Absence, when he was called away by an unnatural Rebellion of his Sons, at the supposed Instigation of their Mother, found means to get Access to her, and compelled her to swallow Poison. Frequent Walks in this delightful Recess, sacred to the Moments of Contemplation, suggested the following Thoughts, for the Publication of which, let the alarming Progress of Lewdness, and consequently of Licentiousness of Manners, which indeed threatens the Dissolution of our State, be accepted as an Apology’ (Advertisement).

The title vignette, an exquisite miniature of the picturesque ruins at Godstow, is by Ralph Beilby, of the celebrated Newcastle family of glass enamellers and engravers. ‘Ralph's... artistic work flourished through his collaboration with the historian John Brand, which produced the engraving of Thornton's monument plate for Brand's history of Newcastle and a plan of Newcastle in 1788. Yet he is mostly remembered as Thomas Bewick’s master after the latter’s entry into the Beilby workshop [as an apprentice]. Their collaboration produced, among other works, A General History of Quadrupeds’ (Oxford DNB). Jackson, p. 39.