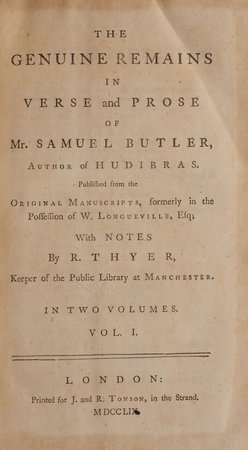 < >
AN ELEPHANT IN THE MOON

BUTLER, Samuel. ~ The genuine Remains in Verse and Prose of Mr. Samuel Butler,... Published from the Original Manuscripts, formerly in the Possession of W. Longueville, Esq; with Notes by R. Thyer, Keeper of the Public Library at Manchester. In two Volumes.... London: Printed for J. and R. Tonson. 1759.

First edition, which includes the first printings of some 120 of the author’s Characters written between 1667 and 1679. These Characters, loosely modelled on Theophrastus are brilliant prose satires on contemporary types, such as: ‘A Modern Politician’, ‘An hypocritical Non-conformist’, ‘A Republican’, ‘A State-Convert’, ‘A modern Statesman’, ‘A Fifth Monarchy man’, ‘A small Poet’, ‘A Lawyer’, ‘A Virtuoso’, ‘A Justice of Peace’, ‘A Fanatic’ and ‘An Hermetic Philosopher’.

Also included is Butler’s hilarious satire on the Royal Society, ‘The Elephant in the Moon’, in which the ‘elephant’ turns out to be a fly caught in the telescope: ‘A learn'd society of late, /The glory of a foreign state, /Agreed, upon a summer's night, / To search the Moon by her own light; / To take an invent'ry of all / Her real estate and personal; / And Make an accurate survey / Of all her lands, and how they lay...’