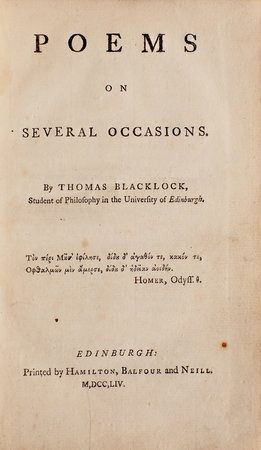 [bound with:] SPENCE, [Joseph]. An Account of the Life, Character, and Poems of Mr. Blacklock; Student of Philosophy, in the University of Edinburgh. London: Printed for R. and J. Dodsley, 1754, pp. 61, [3], including 3 final pages of advertisements; woodcut ornaments.

3 works bound together, 8vo (196 × 125 mm); contemporary Scottish spotted calf, spine gilt in compartments; rubbed, joints cracked and worn with some loss at heads of each; early inscription to initial blank leaf ‘Dr Thomas Blacklocks poems’ with an erasure below.

First editions of three contemporary works. The blind Scots poet Blacklock had lost his sight through smallpox in infancy, but later rose to prominence in Edinburgh, enjoying the patronage of David Hume and company of Robert Burns. He met both Johnson and Boswell, and was something of a mentor to a young Walter Scott.

The third item here, the 16-page Advice to the Ladies, seems to be the poet’s rarest work. It appeared anonymously and is still not attributed to Blacklock by ESTC (which locates 6 copies) but is generally accepted as his, a fact underlined by its presence in this small collection. The Oxford DNB notes that while Blacklock wrote many satires throughout his life, they were usually consigned to the flames. This is a rare exception, published during his lifetime.

Some of Blacklock’s poems were published as a collection as early as 1746, but the Poems on Several Occasions is the text that was most often reprinted. The Life, by Spence, the Oxford’s Professor of Poetry is uncommon in the original, separate issue found here. ESTC lists copies of Advice to the Ladies at Bodley, Mitchell Library (Glasgow), Cornell, Library Company of Philadelphia, Newberry and Yale.