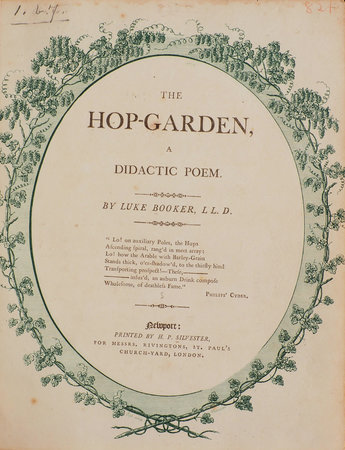 First editions, both provincially printed. The Hop-Garden appeared in 1799 in both an octavo and a quarto issue, the latter with the green title border as here. ESTC suggests that the latter is by far the rarest, with only 2 copies (Senate House and University of Illinois) as compared to 18 copies of the octavo. This is perhaps misleading, since a sample of individual catalogues shows that several copies of the quarto wrongly appear as the octavo in ESTC. Booker explains in his preface that in the course of preparing his didactic poem Malvern he found himself gathering so much material on the cultivation of hops that it began to outstrip the other subjects of the poem, so he extracted it for a complete poem, The Hop-Garden. He adds an entertaining sequel on the subject of ale and its role in rural celebrations, notably Christmas, while insisting ‘Drink to refresh, not to stupify the soul’ (p. 106). (Hop-Garden): Jackson, p. 234; not in Johnson, Provincial Poetry; Aubin, p. 45; (Malvern), Jackson, p. 227; Johnson, Provincial Poetry 103.