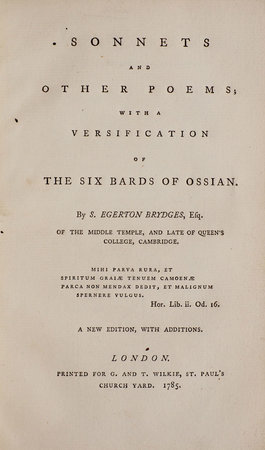 BRYDGES, Egerton, Sir. ~ Sonnets and other Poems; with a Versification of the six Bards of Ossian... London: Printed for G. and T. Wilkie. 1785.

Published in the same year as the very scarce first edition (also published by G. and T. Wilkie). Brydges (1762–1837) was born at Wootton (East Kent) and was educated at Maidstone, Canterbury, Cambridge (Queen’s College) and Middle Temple. He was a distant relative of the Austen family. He was successful as an antiquary and bibliographer, but his literary productions (which he considered his best work) met with little contemporary success. Sonnets and other poems received a lukewarm reception, which is said to have plunged him into a six year depression from which he never truly recovered. Convinced of his own talents, he consoled himself by immersing himself in family history, insisting he had a better claim to the English throne than George III and claiming the title of the extinct barony of Chandos. This latter claim was contentious, with detractors suggesting his ancestors were merely yeomen of Harbledown near Canterbury and that entries in the Kentish parish registers had been falsified. ‘In 1825 he published Stemmata illustria, charting his presumed descent from Charlemagne’ (Oxford DNB). Jackson, p. 119.