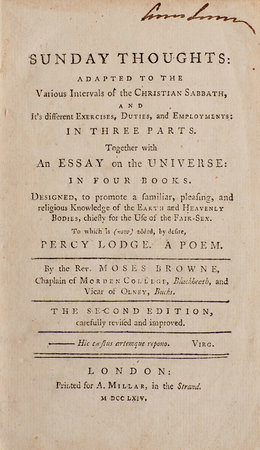 BROWNE, Moses. ~ Sunday thoughts: adapted to the various Intervals of the Christian Sabbath, and it’s different Exercises, Duties, and Employments: in three Parts. Together with An Essay on the Universe: in four Books. Designed, to promote a familiar, pleasing, and religious Knowledge of the Earth and Heavenly Bodies, chiefly for the use of the Fair-Sex. To which is (now) added, by desire, Percy Lodge. A Poem. By the Rev. Moses Browne, Chaplain of Morden College, Blackheath, and Vicar of Olney, Bucks. The second Edition, carefully revised and improved. London: Printed for A. Millar. 1764.

Second edition, first published in 1752 as Works and the Rest of the Creation. The country-house poem Percy Lodge, written for the countess of Hertford and separately published in 1755, is here added for the first time. In this copy an appreciative early reader has added three pages of antiquarian notes in manuscript at the end, concerning the history of the Percy family from the sixteenth century.

‘An early admirer of Chaucer, Spenser, and Milton, Moses Browne was a deservedly popular minor poet. Though he did not find his way into the standard collections, both Nathan Drake and Robert Southey acknowledged Browne's early contribution to romantic naturalism’ (Oxford DNB). Browne had been given the living of Olney in 1753 and there raised some 13 children before taking up the chaplaincy of Morden College, Blackheath, in 1763. He retained Olney, in absentia, being served there by curate John Newton, famous for collaborating with Cowper on Olney Hymns (1779). Aubin, 322.