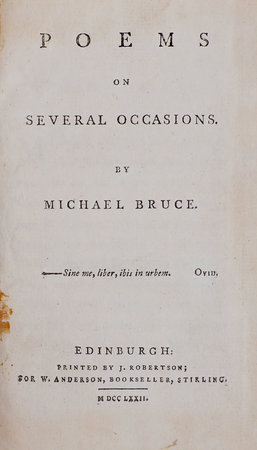 Second edition (first 1770); both editions being posthumous. Very rare, with ESTC listing only the NLS copy. Bruce (1746-1767) was the son of a Scottish weaver on the shores of Locklevel, the locale which provided him with the subject and title of his finest long poem (pp. 77-111 here). The poems were gathered after Bruce’s death (from consumption, aged 21) by his sometime school friend, John Logan. The selection was apparently contentious, since it ignored almost all of Bruce’s more numerous devotional works (he had intended to enter the ministry after studying at the Associated Synod College at Kinross). ‘[Bruce’s] verse is broadly bucolic, tinged with a gentle melancholy, and while the style and convention of the poems are overtly classical they generally avoid rigidity or self-consciousness. Equally the tragically blighted life of the... all-but self taught ‘natural genius’, sometime shepherd-boy, and archetypal ‘man of feeling’ appealed to the sentimental tastes of the 1770s and 1780s and ensured some posthumous recognition. While Bruce's published verse did not fulfil the expectations of friends who predicted that he would join the pantheon of great poets writing in English, his verse and memory inspired a set of devoted followers into the twentieth century’ (Oxford DNB).

This attractive copy, in a well preserved Scottish binding, bears an early manuscript extract from the 1781 Monthly Review (vol. 65): ‘I never pass the place (a little hamlet skirted with a circle of old ash trees about three miles on this side of Kinross) where Michael Bruce resided... but I stop my horse involuntarily...’ This edition not in Jackson, who lists editions of 1770, 1782, 1796 and 1807.