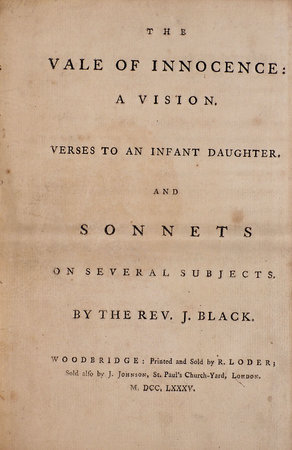 BLACK, John. ~ The Vale of Innocence: a Vision. Verses to an infant Daughter. And Sonnets on several Subjects... Woodbridge: Printed and Sold by R. Loder; sold also by J. Johnson... London. 1785.

[bound with:] The Conjunction of Jupiter and Venus, in Leo; on the 29th. of September, 1801. A Happy Prelude to a propitious Peace. A Poem. Mercury’s Apology for the Curate’s Blunder, An Impromptu; Addressed to the Right Hon. the Earl of Yarmouth.And other poetical Pieces... Ipswich: Printed and sold by J. Bush: sold, also, by G. and J. Robinsons, London; Bush, Yarmouth; Loder, and Alexander, Woodbridge; Dingle, Bury; and all other booksellers, [n.d., 1801.], pp. 23, [1].

First editions of all three works, the first two very rare. Scots-born John Black (1753-1813) was perpetual curate of Butley in Suffolk and headmaster of Woodbridge Free School. All in all, these three works give an agreeable outline of the life of a civilised and well-connected country pastor in a prosperous part of England, with poems dedicated to various aristocrats, and also to ‘The Ladies of the Book-Society, Woodbridge.’ The dedication of another thanks the poet’s friend ‘Mrs. Pulham, on her drawing the author’s portrait for this [the 1799 volume’s] little publication...’

The volume has an interesting later provenance. Alexander Gardyne had a substantial collection of early poetry, and at some point in the 1930s, or perhaps earlier, this volume found its way into the collection of Ralph Hodgson, poet and cartoonist. In 1933 Hodgson moved to Japan. He became guest lecturer in English literature at the Japanese University of Sendai and remained in Japan until 1938, latterly working on translations of the ancient Mannyoshui poems for the Japanese ministry of education, and presumably leaving this and other books behind when he left, with World War II imminent. The text contains a few pencil notations identified as in the hand of the poet Ralph Hodgson, and two loosely inserted folded leaves of manuscript quotations also identified (in English and Japanese) as in Hodgson’s hand. (Vale of Innocence): Jackson, p. 120, not in Johnson, Provincial Poetry; (Conjunction of Jupiter and Venus) Jackson p. 251, not in Johnson, Provincial Poetry; (Poems): Jackson p. 237, Johnson, Provincial Poetry, 98. ESTC gives the following locations for The Vale of Innocence: BL, Bodley, Suffolk Record Office, Yale (OCLC adds no more); OCLC lists BL, Cambridge and New York Historical Society for the post-ESTC period The Conjunction of Jupiter and Venus; the 1799 Poems is relatively more common, but still scarce.