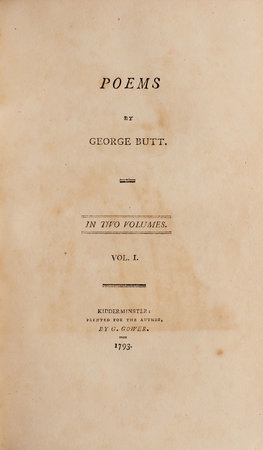 Sole edition. Staffordshire born and Oxford educated, George Butt made a career in the Church of England. ‘In the late 1770s Butt was part of the coterie of Anne, Lady Miller... at Batheaston near Bath, and dropped verses into her celebrated vase. He made his name with Isaiah Versified (1784), a work quite highly estimated by contemporaries; several sermons appeared on special occasions, and a collected two-volume Sermons dates from 1791. Butt’s Poems in two volumes was published in 1793’ (Oxford DNB). The collection is eclectic, with poems on Pythagorean transmigration, a long ‘Dialogue between the Earl of Chesterfield and Mr. Garrick, in the Elysian Shades’ and poems to Edmund Burke and James Beattie. The first of the frontispieces is a portrait, the second a fine view of the church and rectory at Kidderminster.

There is an interesting early manuscript insertion to a pasted slip at the head of ‘A Pastoral Dialogue between Basil and Colin. In Imitation of Virgil’s First Eclogue’ (p. 126 in vol. I) which reads ‘This dialogue was recited in one of the intervals between the acts of the Acclularia of Plautus as represented in the Classic Theatre of Reading School soon after the outbreak of the French Revolution. The Curtain rising discovered a Rural Prospect, with Basil and Colin seated under a Beech tree. Colin, who had first finished the air of the Marseillaise hymn laid down his pipe; when Basil, warmly pressing his hand, started up and began the following address.’ Jackson, p. 185; not in Johnson, ESTC lists 10 UK copies, but only Harvard, Huntington and Yale in the US.