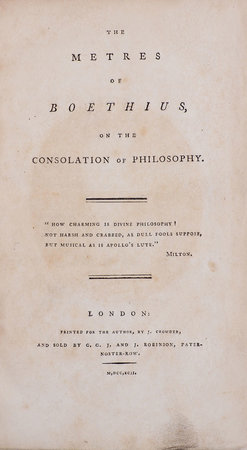 BOETHIUS. ~ The Metres of Boethius, on the Consolation of Philosophy. London: Printed for the author, by J. Crowder, and sold by G. G. J. and J. Robinson... 1792.

8vo (220 × 130 mm), pp. [5], cix,[3], 6-108, with a half-title plus an engraved portrait; some dampstaining throughout, light offset from portrait to title, early manuscript annotation to verso of portrait; modern paper-backed blue boards.

First edition of this anonymous translation, with parallel Latin and English text and a lengthy preface translated from ‘Peter Berty’ (Flemish polymath Petrus Bertius, 1565-1629) also in Latin and English. The production was not well received and Lowndes describes it as ‘a miserable performance’. An early hand-written note to the verso incorrectly attributes the translation to Lord Preston, who had prepared an earlier translation (first published 1695). Jackson, p. 175.