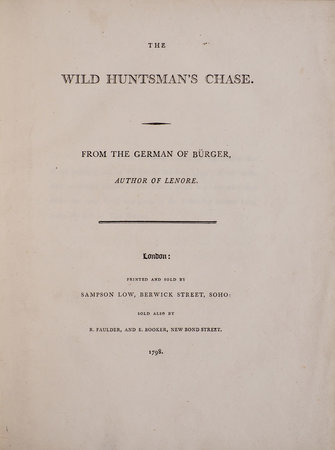 BÜRGER, [Gottfried August]. ~ The Wild Huntsman’s Chase. From the German of Bürger, Author of Lenore. London: Printed and sold by Sampson Low... sold also by R. Faulder, and E. Booker... 1798.

First edition in book form, the Schwerdt and Duke of Gloucester copy, of this anonymous translation of Bürger’s ‘Der Wilde Jäger’. A note on the leaf following the title states: ‘The following Translation appeared in one of the public prints on the 26th of October, 1796. A few weeks after an elegant version of the Ballad, which had been advertised about the same time, was given to the Public by another hand, under the title of The Chase’ [referring Sir Walter Scott’s first published literary work The Chase and William and Helen: Two Ballads from the German of Gottfried Augustus Bürger]. The present translation received surprisingly few contemporary notices and the Critical Review remarked that the work would probably never have been translated had it not been for the ‘great and deserved reputation of Lenore’, the work which brought Bürger European fame. Jackson, p. 231; Schwerdt I, p. 87; ESTC lists 4 UK copies (BL, Bodley, Cambridge and NLS) and 5 in the US (Clark, Missouri, North Carolina, Texas and Yale).