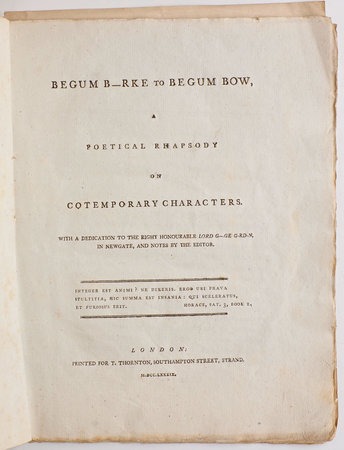 BEGUM. ~ Begum B—Rke to Begum Bow, a poetical Rhapsody on cotemporary [sic] Characters. With a Dedication to the Right Honourable Lord G---ge G-rd-n, in Newgate, and Notes by the Editor. London: Printed for T. Thornton... [ 1789].

Sole edition, an assassinatory satire on the troubled Edmund Burke on the eve of the French Revolution. The Monthly Review helpfully explained the mysterious title to contemporaries: ‘a ‘Begum’ being a princess of the harem of Hindustan, and the poem purporting to be in the voice of Burke, who has transmigrated into such princess, addressed to one of his sisters in the harem.’ Burke was the most prominent political victim of the regency crisis surrounding the onset of King George’s madness in 1788. He alienated both King and Regent and many of his own party in advocating (like Fox) an immediate transfer of power to the Regent. In Begum B—rke to Begum Bow he bewails his fate as the king temporarily recovers his mind: ‘The King restor’d still keeps his Treas’ry Boy (Pitt), / And half the nation will go mad with joy.’ Jackson p. 146; scarce: ESTC lists UK copies at BL (2), Cambridge, Bodley, Sheffield, NT (Nostell Priory) and US copies at Harvard, Huntington and Yale (2).