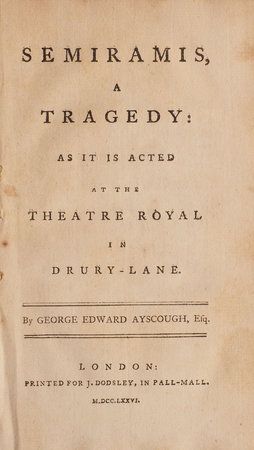 AYSCOUGH, George Edward, Captain. ~ Semiramis, a Tragedy: as it is acted at the Theatre Royal in Drury-Lane... London: Printed for J. Dodsley... 1776.

First edition of the soldier-author Ayscough’s version of Voltaire’s tragedy on the life of the Assyrian queen Shammuramat. ‘In December 1776 Ayscough’s version of Voltaire's tragedy Sémiramis (1748) was staged at Drury Lane. The play, dedicated to Ayscough's brother-in-law Sir James Cockburn and published by J. Dodsley, incorporated an epilogue by Richard Sheridan. The editor of the London Review dismissed the piece as ‘not worth quarrelling about’... Nevertheless, Ayscough’s tragedy was performed eleven times, earning the author three crowded benefit nights. It appears that Ayscough recruited his brother officers to attend the first night of the play and he addressed them directly in his prologue, promising them ‘(this great bus'ness ended) / He'll gladly re-assume the Sash once more’. Ayscough died on 14 October 1779’ (Oxford DNB). This copy is from the Allardyce Nicoll collection, with a sheet bearing his notes.