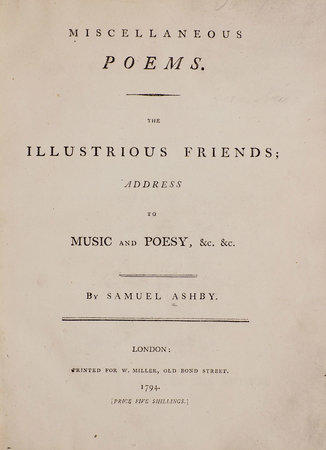 Sole edition of this collection by a Bungay Quaker poet. By the far the longest poem is the first, ‘The Illustrious Friends’, a violent polemic directed against Thomas Paine and the principles of the Rights of Man. After some 640 lines describing the hell to which the nation would be brought by them, he concludes:

‘Such our Republic will possess,
To plague, to torture, and oppress;
To force our arbitrary sway,
And make our subject Fiends obey:
For such is Paine’s and Satan’s plan,
The practice of the Rights of Man.’

The subscribers are predominantly East Anglian. This appears to have been Ashby’s only substantial collection, with COPAC recording just one other publication bearing his name, Ode on the Surrender of Paris, to the Allies; July 3d. 1815 (Bungay printed, apparently by the author himself) and another suppositious title, Song of “Old Bungay”: as sung at the Theatre, by Mr. Fisher (Bungay, c. 1816). The British Book Trade Index records him as ‘Printer, Bookseller, Stationer, Publisher’ in 1830. Not in Jackson; ESTC: BL, Bodley, Cambridge and Suffolk Record Office; Philosophical Society, Princeton, Minnesota, Yale and National Library of Australia.