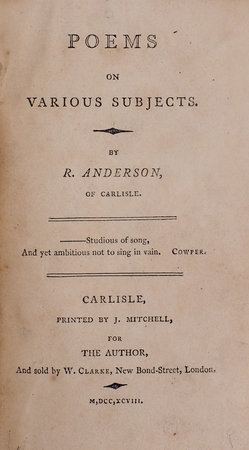 Sole edition of the Carlisle poet’s first collection (his dialect collection Ballads in the Cumberland Dialect followed in 1805). After a brief Quaker education in his home town, Anderson worked as a calico printer and as apprentice to a pattern drawer, a trade which took him to London, where he is said to have been inspired by songs heard at Vauxhall Gardens (Oxford DNB).

This first collection was not widely noticed (in comparison with the Ballads), but the Monthly Visitor, and Pocket Companion of October 1799 devoted a few lines to it. ‘This poet is self-educated, and therefore his productions must not be severely scrutinized... We, however, are pleased with many parts of this little volume, and can recommend it to our readers.’ Jackson, p. 229; Johnson, Provincial Poetry 21; ESTC lists British copies at the British Library and Bodley only, and 8 copies in the US.