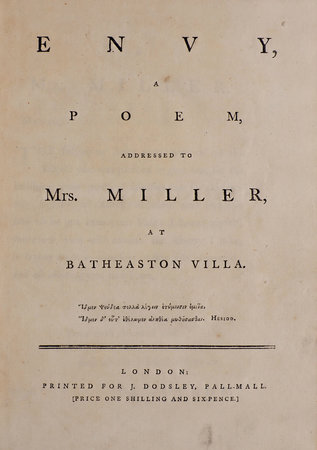 [and:] An Election Ball, in poetical letters from Mr. Inkle, at Bath, to his wife at Glocester. The fourth edition... London: Printed for J. Dodsley, 1779, pp. 64, including engraved frontispiece, engraved title vignette; not in Jackson.

‘A few years after the publication of the New Bath Guide in 1766, Christopher Anstey came into contact with Captain and Mrs. Miller and became a member of the famous “poetical coterie” at Batheaston’ (Munby). Horace Walpole, describing their activities in a letter of January 5th 1775, said that they held ‘a Parnassus fair every Thursday, [and] give out rhymes and themes and all the flux of quality at Bath contend for the prizes.’ Much of this collection relates to these gatherings.

Envy was written for one of the Batheaston Vase Competitions, though was completed too late for submission. It has added to it Winter Amusements, an Ode, which is separately paginated and is usually listed as a separate work. A Dodsley advertisement at the end of this collection, however, makes clear that copies of Envy could be bought with the addition of Winter Amusements and Dodsley probably sold off remaining copies of Winter Amusements with Envy.

The fourth edition of An Election Ball is scarce, with ESTC locating 4 copies (all in the US, none in the UK), and it is apparently a straightforward reprint of the third edition. It does not contain the illustrations by Bampfylde, which only appeared in the fifth edition, having first appeared in the Latin Epistola poetica familiaris composed by Anstey and addressed to Bampfylde, being the next bound item in this collection.

Thomas Gray’s Elegy in Latin is the second edition of Anstey’s translation the first having appeared at Cambridge in 1762, his first publication. A Pindaric Epistle, a late edition, has a lengthy ‘Appendix’ consisting of a one act play ‘containing the Author’s Conversation with his Bookseller, &c. &c.’ The final advertisement to Speculation is frequently wanting. Munby, Book Collector’s Quarterly, 16, pp. 22-3.