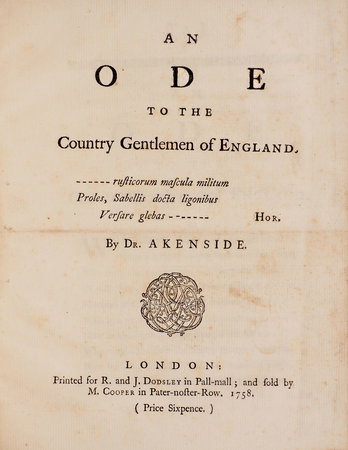 First edition in book form. Published against a backdrop of the Seven Years’ War, Akenside’s address to the country gentlemen of England was intended to rouse them and their tenants to the defence of their country. Deploring the tendency for British interests to be left to mercenary troops in the pay of the British Army (’slavish ruffians hir’d for their command’), Akenside appeals to the historic sensibilities of the gentry of ‘heedless Albion.’

The poem was also printed in full in the London magazine, or, Gentleman's Monthly Intelligencer, of April 1758 and at least one provincial journal, the Newcastle General Magazine, in the same month. Rothschild 25.