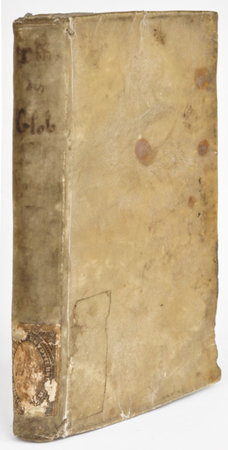 First edition in French of Tractatus de globis (1594), an important navigational work originally dedicated to Sir Walter Raleigh. Hues had studied at Oxford where he became acquainted with Richard Hakluyt and later, Walter Raleigh and Thomas Harriot, before taking part in a voyage to Newfoundland. In five parts, the book describes the practical uses of the globes designed by Molyneux and, especially, how mariners could find the sun’s position, latitude, course and distance, amplitudes and azimuths, and time and declination. The fifth part describes the use of rhumb lines in navigation.

The translation is by Denis Henrion, the Paris mathematician remembered for his edition of the works of Viète and for the introduction of the calculating device known as the proportional compass to France. Henrion’s is a faithful translation with numerous interpolations of his own (indicated by italics). In these, Henrion adds several practical details to the methods of calculation but also takes the opportunity to advertise his Cosmographie, which was not to appear until two years later. At several points he affirms Hues’ text while stating ‘comme nous avons enseigné en nostre Cosmographie.’ The notes on the operation of the proportional compass promised by the title are confined to very sparse remarks on how a lengthy calculation, for example, could be achieved simply with the compass. They would appear to be an attempt to advertise another of Henrion’s works, Usage du compas de proportion (also 1618) and perhaps the instruments themselves. Copac lists no UK copies. Worldcat lists US copies at Folger, Harvard, Illinois, Minnesota and Brown. Copies of the same year are known with the imprint ‘Michel Daniel’ and identical pagination, primacy, if any is not established.