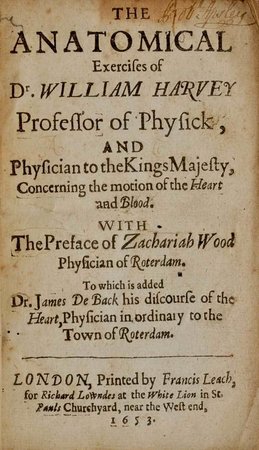 HARVEY, William. ~ The Anatomical Exercises...concerning the motion of the Heart and Blood. With the Preface of Zachariah Wood Physician of Rotterdam. To which is added Dr. James De Back his discourse of the Heart... London: Printed by Francis Leach, for Richard Lowndes, 1653.

3 parts in 1 volume, 8vo (157 × 94 mm), pp. [xl] leaves (including the first blank); [xx], 123, [ii], 86. Title a cancel as in most copies, divisional titles to the second and third parts. Upper corner of the front free endpaper and the first blank leaf torn away, some very minor worming in upper inner corner towards the end touching a few letters, some light foxing and minor soiling. Original publisher’s sheep, a little cracked and marked. Expertly rebacked preserving almost all of the original blind-ruled backstrip, two small lacunae in the leather of the lower cover and tip of one corner worn. Preserved in a modern cloth box. Early signature of Robert Apsley at top of title. A very good copy.

First edition in English of the Exercitatio Anatomica De Motu Cordis (1628) in which was described the discovery and proof of the circulation of the blood. ‘The most important book in the history of medicine. Harvey proved experimentally that in animals the blood is impelled in a circle by the beat of the heart, passing from arteries to veins through pores (i.e. the capillaries, seen by Malpighi with the microscope in 1660’ (Garrison & Morton). It should also be regarded as ‘the first record of a complete biological investigation, giving a clear and accurate description of the methods employed to recognise the laws governing an important vital process, a knowledge of which had till then been befogged by mistaken conceptions...’ (H.P. Bayon in Keynes).

Harvey’s hypothesis, like almost all revolutionary hypotheses, was initially very unpopular and was widely refuted. Harvey himself admitted that his career was nearly destroyed by the publication of De Motu Cordis. However, it is interesting that he was quickly vindicated and that the circulation of the blood became accepted as irrefutable medical fact within his own lifetime, albeit towards its end. This lifetime edition in English reflects that vindication. Keynes wrote of the text ‘It gives a vigorous if unpolished, rendering of Harvey’s book in contemporary language.’

The translation is from the Rotterdam edition and includes the additional commentaries by Zachariah Wood and James De Back. This edition also contains the first English translation of Exercitio anatomica de circulatione sanguinis (of which the first edition had appeared in Latin at Cambridge in 1649) again taken from the Rotterdam edition. This is an important text in its own right, providing a restatement of Harvey’s hypothesis concerning circulation supported by further experimental proof.

This is an unusually tall copy. In most copies the headlines, and sometimes even the top lines of the text, are shaved. In this copy none of the headlines is shaved, and on some leaves the lower edge is uncut. This copy has 11 of the 13 misprints (to pagination and signatures) listed by Keynes that were corrected as the book passed through the press. In addition, F3 is mis-signed F5. It is complete with the first blank leaf. Wing H1083. Cf G&M 759, Printing and the Mind of Man 127 (the first edition of 1628). Keynes, William Harvey, 19.