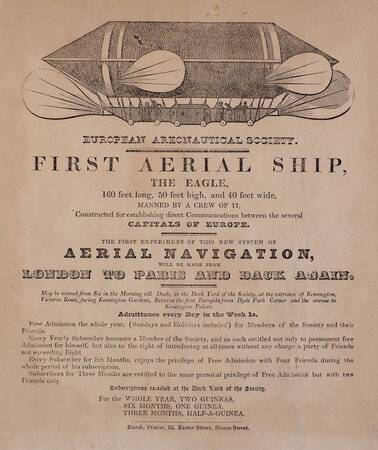 (AVIATION). European Areonautical [sic] Society. ~ First Aerial Ship, the Eagle, 160 feet long, 50 feet high, and 40 feet wide, manned by a crew of 17, Constructed for establishing direct Communications between the several Capitals of Europe. The first experiment of this new system of Aerial Navigation, will be made from London to Paris and back again. [London:] Blatch, [ 1834].

A very rare handbill. The Eagle was ‘an airship designed by the Comte de Lennox in 1834 to create a direct communication link between the capitals of Europe. The first aerial ship of its kind, it was exhibited in the grounds of the Aeronautical Society in Kensington, London... The ship was cylindrical with conical ends and had eight paddle-shaped flaps, four on either side, which were intended to be worked backwards and forwards manually by a series of cords and chains. However, the airship proved too heavy to lift its own weight and was destroyed by onlookers after a failed ascent from the Champ de Mars, Paris, on 17th August 1834’ (Science Museum, Science and Society Picture Library online). Though several prints and pamphlets accompanied the exhibition of the Eagle, most are very rare. WorldCat: University of Newcastle (UK) and University of Pennsylvania (US) only.