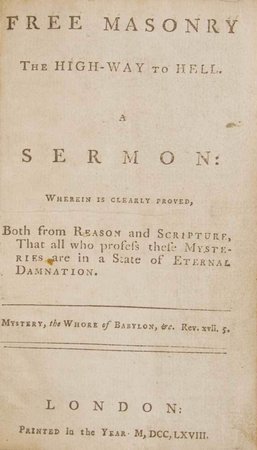 (FREEMASONRY). ~ Free masonry the high-way to hell. A sermon: wherein is clearly proved, both from reason and scripture, that all who profess these mysteries are in a state of eternal damnation. London: [no printer’s name given], 1768.

8vo (162 × 90 mm), pp. [ii], 38, bound without half-title/initial blank and final blank/s (the title is on a single leaf before A1, while the final leaf is D1). Typographical ornaments. Upper margins cut quite close, pagination just trimmed in a few cases. Late nineteenth-century half calf, spine with longitudinal purple label lettered in gilt, nineteenth-century bibliographical notes to front pastedown. Rubbed. A good copy.

An apparently unrecorded issue of this anonymous anti-freemasonry sermon, probably a piracy of the incendiary pamphlet printed in the same year as Masonry the Way to Hell. The Sermon provoked a response from John Thompson, freemason, entitled Remarks on a sermon lately published; entitled, Masonry the way to hell. Being a defence of that antient and honourable order, against the Jesuitical sophistry and false calumny of the author.
The sermon takes as its text Revelation XVII, 5 ‘And upon her forehead was a name written, Mystery, Babylon the Great, the Mother of Harlots, and Abominations of the Earth’ and gives a detailed consideration of the supposed ceremonies of the masons. Four other editions/issues dated 1768 under the slightly different titles with different paginations, but all four are recorded by ESTC in single copies only. Not found in ESTC or Worldcat.