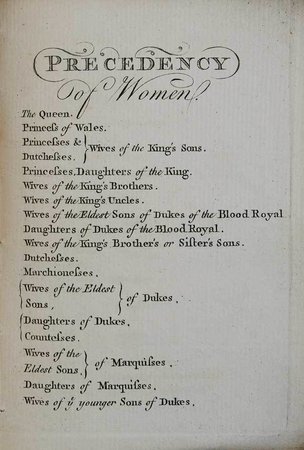 EDMONDSON, Joseph. ~ Precedency by Joseph Edmondson Esq. Mowbray Herald. London: ‘Engraved and Printed for the Editor and Sold by him at his House in Warwick Street Golden Square St. James,’ [n.d. but c. 1780.]

First edition, engraved throughout and printed for the author, an invaluable guide to the stratigraphy of Georgian society, which includes a section on the ‘Precedency of Women’. Joseph Edmondson was an artist of humble origins who had begun his career as a coach-painter, and became coach-painter to Queen Charlotte in 1763. ‘On 21 January 1764, thanks to the support of the new deputy earl marshal, Lord Suffolk, Edmondson was created Mowbray herald of arms extraordinary, although he continued his successful coach-painting business until his death.’ (n Oxford DNB). Precedency gives tables of precedency of British men and women and provides a list of ‘collar days’ on which those entitled may wear their official “collars” indicating precedency. The book was reprinted in a second edition c. 1785.