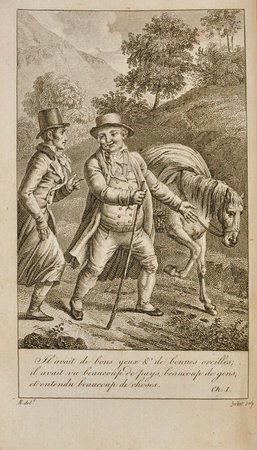 First edition. This immensely popular juvenile novel emphasises thrift and hard work through the character of Simon, a travelling salesman. It was published by La Société pour l’instruction élémentaire following a competition, with a prize of 1000 francs donated by an anonymous benefactor, for a work of no more than 250 pages in which were ‘tracés avec simplicité, précision et sagesse, le principes de religion chrétienne, de morale, de prudence sociale’, for the improvement of everyday town and country people. There were numerous subsequent editions in France, as well as translations into Spanish, Italian, German, Dutch, Greek and even Breton.

A nephew of the Jussieu brothers of botanical fame, Laurent Jussieu became director of police to the French minister for the interior in 1837. Quérard IV, 276. Though remarkably popular, and frequently reprinted, the first edition is rare with the CCFr listing just a handful of copies and Worldcat giving University of Virginia as the only US location of the first edition, with additional copies in Montreal and Toronto.