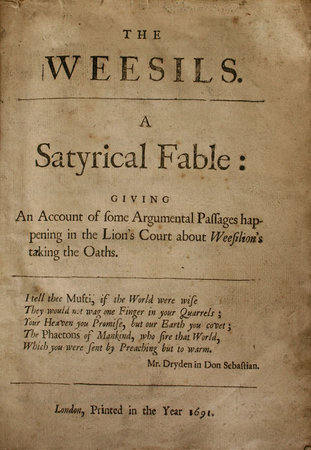 [D’URFEY, Thomas.] ~ The Weesils. A satyrical fable: giving an account of some argumental passages happening in the Lion's Court about Weesilions taking the oaths. London: [n.p.], printed in the year. 1691.

First edition of D’Urfey’s anonymously published satire on William Sherlock, lampooning his notorious abandonment of nonjuror principles and satirising the reputed influence of his much-reviled wife. A Church of England clergyman and religious controversialist, Sherlock had allied himself with the nonjurors in 1689 by conspicuously refusing to take the oath to the newly crowned William and Mary. Onlookers were stunned Sherlock subsequently performed a complete about-face and very publicly prayed for the King and Queen as de facto sovereigns in 1690, a move which inevitably provoked much scorn from all sides.

D’Urfey himself was a popular comic playwright whose career had flourished under the patronage of Charles II. Briefly left in the political wilderness during the more sober reign of James II, the coronation of William III in 1689 offered new opportunities which D’Urfey was quick to exploit. Having pledged himself to the whigs, he wrote birthday songs and odes for the king and queen and further curried favour by producing a series of anonymous poems in which he satirised those opposed to the new regime. Wing D2790B