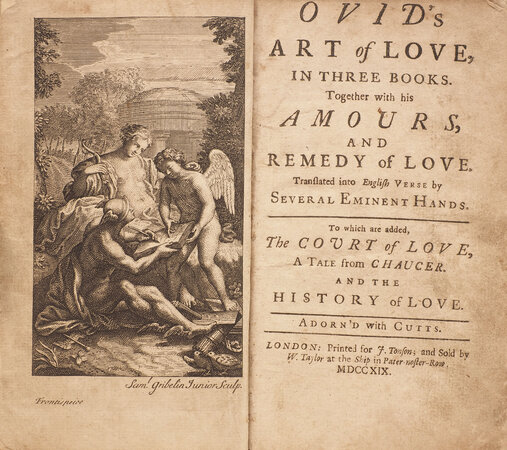 OVIDIUS NASO, Publius. ~ Ovid’s Art of Love, in three books. Together with his amours, and remedy of love. Translated into English verse, by several eminent hands. To which are added, The Court of Love, a tale from Chaucer. And the History of Love. Adorn'd with cutts. London: printed for J. Tonson; and sold by W. Taylor at the Ship in Pater-noster Row, 1719.

A scarce early edition. Three editions had previously been published, the first in 1709, and this popular title went on to be republished numerous times during the eighteenth century. The translators are identified in the text as John Dryden, Nahum Tate and William Congreve. 'The history of love' is by Charles Hopkins and 'The court of love' is a metrical paraphrase by Arthur Maynwaring. ESTC gives 7 locations: BL (2 copies), John Rylands, Manchester (2 copies). McMaster University and Universities of Illinois and Waterloo.