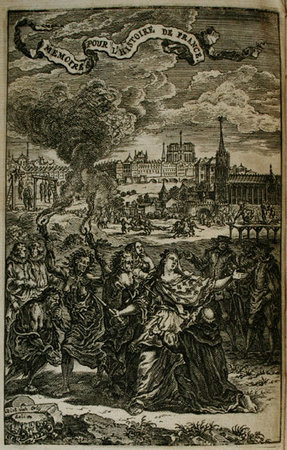 A finely-illustrated history of France in the sixteenth and early-seventeenth century. The second part (1589-1611) is printed here for the first time; the first part originally having been published in 1621 as Journal des choses memorables advenues durant tout le regne de Henry III (Cioranesco 13602).

The imprint is certainly false, and Brussels is the more likely origin, though the woodcut device on the first title is that of Antoine Vincent of Lyon. The frontispiece is notable and is a violent allegory of this turbulent century, the female personification of France is beset by a crowd of petitioners in the form of vagrants, a monk, nobles and merchants while in the background several brutal excutions are enacted, with the city of Paris and the towers of Notre Dame in the distance. It is the work of Richard van Orley (1663-1732), a Brussels painter and engraver, and engraved by François Harrewijn (1700-1764), also a Brussels engraver, pupil of Romeyn de Hooghe, known primarily for his portraits of historical figures. Harrewijn also supplied the excellent suite of 33 portraits of kings and queens (including Mary Stuart) and leading members of church and state.