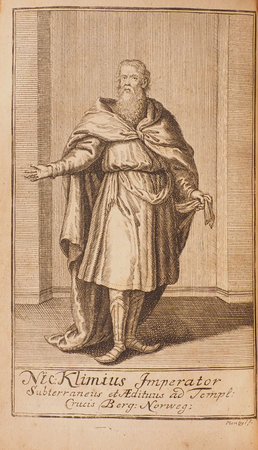 First edition. The Subterranean Voyage of Nicolas Klim is one of the classics of speculative and utopian fiction, written fifteen years after Swift's Gulliver's Travels and often compared favourably with that work. It is the first fully developed novel to be set in the earth's interior, a setting which has been utilised countless times in later science fiction. Klim, a poor student, falls through a hole in the earth just outside the Norwegian town of Bergen and finds himself on the inside of the earth's crust. He lands on the planet Nazar (which orbits a sun at the centre of the earth's cavity) where he finds a nation that lives according to the laws of reason and nature. The peasantry are considered very highly and therefore are the most distinguished class in the state; many of the highest offices are held by women, who are in every way equal to the men. Nazar presents an enlightened utopia, very much in the mould of the ideals of Montesquieu and Voltaire (who Holberg admired enormously) but Klim also travels to other states where the perfect state of society is not so fully developed or is perhaps degenerate, allowing a vivid comparison of political, social and philosophical systems.Holberg (like his hero Klim) was a native of Bergen at a time when Norway and Denmark existed as a twin kingdom. He saw himself as a fully European writer and the equal of the French philosophes. The majority of his works, including the present, first appeared in Latin, the universal language. The adventures of Nicolas Klim were immediately popular and were rapidly translated into all the major European languages.