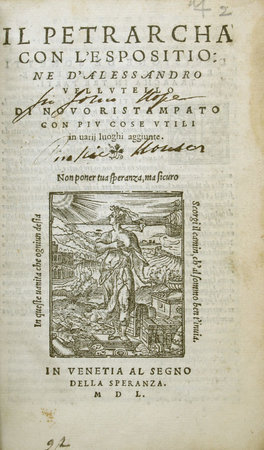 The text of this attractive Venetian Petrarch is that first assembled in 1525 by Alessandro Vellutello, the Lucchese editor best known for his 1544 illustrated Dante. It opens with Vellutello’s account of Petrarch’s life, followed by the Sonetti e Canzoni, the Triomphi and the additional Rime, all with Vellutello’s copious marginal glosses. The printer who published at Venice under the imprint ‘al segno della speranza’ remains unknown. Books from this press usually bear the woodcut device depicting Hope, as here, and are almost always in pocket format.

In the early nineteenth-century the book was in the possession of Sir John Hope (1781-1853) of Pinkie, near Musselburgh, Mid Lothian, who served as MP for Edinburgh for 8 years.