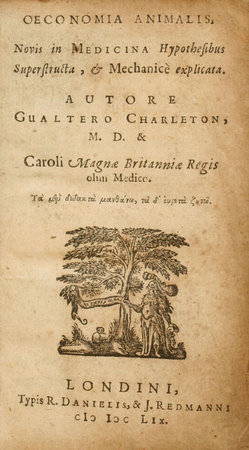 First edition in Latin (issued simultaneously in English) of this important work in the history of physiology. ‘In 1659 Charleton published a mechanistic account of physiology in Latin (Oeconomia animalis) and English (Natural History of Nutrition, Life, and Voluntary Motion), which included the suggestion that there was no increase in volume when a muscle contracted. Charleton was here rejecting the Cartesian account which attributed muscle shortening to its inflation by animal spirit. Charleton’s assessment was confirmed experimentally by Jonathan Goddard in 1669’ (Henry in Oxford DNB). Wellcome II, not in Krivatsy (nor NLM online catalogue, which list the Amsterdam second edition of 1659 and later London editions only); Russell, British Anatomy, 133; Wing C3685. OCLC locates US copies at Sutro Library (Ca), Northwestern and Bryn Athyn only.