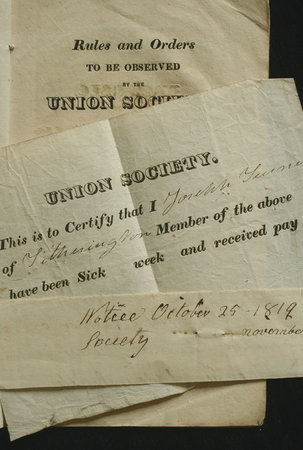 (FRIENDLY SOCIETIES). ~ Rules and orders to be observed by the Union Society, Macclesfield. Founded January 28th 1783... revised by the committee. Macclesfield: P. Hall, 1817.

8vo (220 × 135 mm.), pp.[ii], 20, [2] including “Table of the Society’s Monthly Meetings, until 1900.” Title with wood-engraved beehive ornament, another ornament at end, royal arms to Magistrate’s licence at end. Stitched in the original blue paper wrappers. Some light dampstaining and fraying. Old sellotape repairs to first leaf and upper cover with resulting staining. Early manuscript notes (dated 1819-20) to first leaf and 2 slips loosely inserted (one printed) recording payments made to member Joseph Turner of Tytherington during a winter illness. A fragile item, but very good.

A very rare set of Friendly Society regulations, with additonal evidence of their operation in the form of slips and notes of payment to a member. Though the history of this form of co-operative insurance goes back to early times it is considered to have formally begun in England with the Acts encouraging their formation of the late eighteenth-century. Thousands of such societies sprang up at the opening of the nineteenth century. Though initially encouraged, they were also viewed with suspicion in some quarters as hot-beds of political sedition. The Macclesfield rules are notable in this respect, being insistent on the exclusion of all topics of political or religious dispute in meetings, anyone contravening was to be either fined or expelled. Not in COPAC or the BL catalogue.