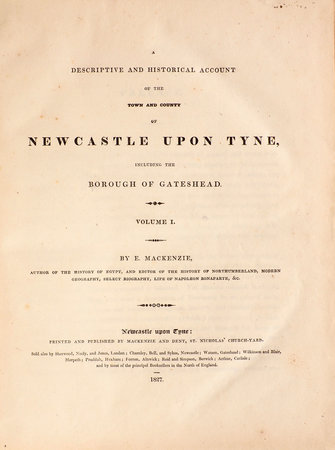 MACKENZIE, Eneas. ~ A descriptive and historical Account of the Town and County of Newcastle upon Tyne, including the Borough of Gateshead. Newcastle: Mackenzie and Dent, 1827.

First edition, containing historical, topographical and contemporary accounts of the city’s religious, civic, educational and cultural buildings and institutions in the early nineteenth century and before.

‘Mackenzie was a strong radical, a secretary of the Northern Political Union, and the leading founder of the Newcastle Mechanics' Institute in 1824. His publications (all from Newcastle) contain much statistical information aimed at providing grounds for local self-improvement. They include An Historical and Descriptive View of the County of Northumberland (2 vols., 1811, revised as ‘historical, topographical and descriptive’ to 2 vols. quarto, 1825); A Descriptive and Historical Account of the Town and County of Newcastle-upon-Tyne (2 vols., 1827); and An Historical, Topographical and Descriptive View of the County Palatine of Durham (1834), which had been completed after Mackenzie's death by Metcalf Ross’ (Oxford DNB).