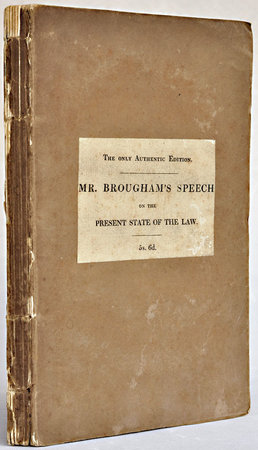 BROUGHAM and VAUX, Henry Peter Brougham, 1st Baron. ~ The present State of the Law. The speech of Henry Brougham, Esq., M.P., in the House of Commons, on Thursday, February 7, 1828, on his Motion, that an humble Address be presented His Majesty, praying that he will graciously be pleased to issue a Commission for inquring into the Defects occasioned by Time and otherwise in the Laws of this Realm, and into the Measures necessary for removing the Same. London: Henry Colburn, 1828.

First edition of Brougham’s famous six-hour speech (still the longest in the history of the House of Commons, though not then described as a ‘filibister’) which set in motion the long-overdue reform of the British legal system. In the course of the speech ‘he exposed flaws in virtually every area of law (omitting only chancery reform and the criminal law) and staked his claim to be parliament’s prime champion of law reform. Brougham’s speech struck the perfect note. He showed himself to be committed to a widescale reform of the legal system, while resisting Bentham’s iconoclasm. In preparing the speech he had in fact received much guidance (and many manuscripts) from Bentham, who still considered Brougham as the man best placed... to advance his projects for codification and the abolition of the common law’ (Oxford DNB).

Though the recipient’s name has been erased, this copy has a presentation inscription by Elizabeth Vassall Fox, Lady Holland, literary and political hostess. It provides an interesting sidelight on her political sympathies.