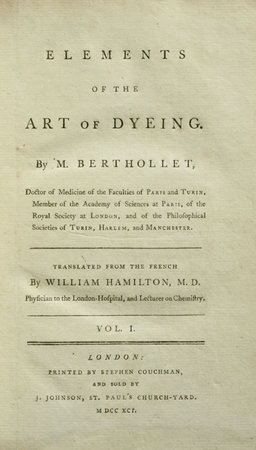 the English Art of dyeing

BERTHOLLET, Claude Louis. ~ Elements of the art of dyeing... translated from the French by William Hamilton... London: by Stephen Couchman, and sold by J. Johnson, 1791.

First edition in English of Berthollet’s important scientific contribution to the burgeoning European textile industry. Having collaborated with Lavoisier on the latter’s pioneering chemical nomenclature and presented some seventeen memoirs to the Academy, the author was already an influential chemist when appointed inspector of dye works and director of the Manufacture Nationale des Gobelins in 1784. The Gobelins had their origins in the workshops of Flemish weavers brought to Paris by Henri IV in 1602 and were formally established by Colbert in 1667 as the “Royal Manufactury of Furnishings to the Crown”. They became the pre-eminent centre for tapestry weaving in Europe

In the Éléments de l'art de la teinture Berthollet “endeavored to place the ancient craft of dyeing on a scientific basis by a systematic discussion of its procedures, coupled with an attempt to find an adequate set of theoretical principles to explain the chemical actions involved. His explanation was that, depending on the variable physical conditions of temperature, quantity of solvent employed, and so forth, when a cloth was dyed the reciprocal affinities of the particles of the dye, the mordants, and the cloth itself were responsible for the kind and quality of dyeing. The colors produced were due to the oxidation of the mordant by the atmosphere” (DSB).

The British edition appeared in the same year as the French, reflecting the market for such a treatise in a country where textile production was becoming one of the most important national industries. A second British edition appeared at Edinburgh the following year and several reprints appeared in the nineteenth century, presumably a measure of the popularity and utility of this scientific manual of dyeing in the British industrial revolution.