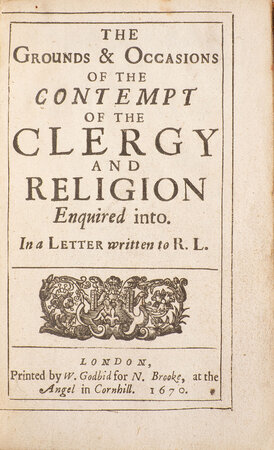 [EACHARD, John.] ~ The Grounds and Occasions of the Contempt of the Clergy and Religion enquired into. In a Letter written to R. L. London: by W. Godbid for N. Brooke, 1670.

First edition. ‘This work, which brims over with wit and humour, had a rapid sale, and passed through many editions. The author represents the contempt with which the clergy were generally regarded as being in great measure due to a wrong method of education or the poverty of some of the inferior clergy’ (DNB).
‘This dealt with two serious concerns of [Eachard’s], education and emoluments, in the witty style between jest and earnest that delighted contemporary readers. As Anthony Wood observed in 1672, “People [are] taken with fooleries, playes, poems, buffooning and drolling books; Ihhards ‘Contempt of the clergy’, Marvill’s ‘Rehearsall Transprosed’, Butler’s ‘Hudibras’”.... The outlandish similes and perverse deductions, supposedly quoted from sermons, are especially memorable, and the controlled modulation of tone throughout the tract anticipates the manner of Swift’ (Oxford DNB).
Eachard was Master of Catherine Hall, Cambridge and later Vice-Chancellor of the University. He was something of a learned wag and here forestalled the likely assumptions of the reader in a good-humoured preface: ‘I can very easily phansie, that many upon the very first sight of the Title, will presently imagin, that the Author does either want the great Tithes, lying under the pressure of some pitiful Vicaridge; or that he is much out of humour, and dissatisfied with the present condition of Affairs; or lastly, that he writes to no purpose at all, there having been an abundance of unprofitable Advisers in this kind.’ Wing E50.