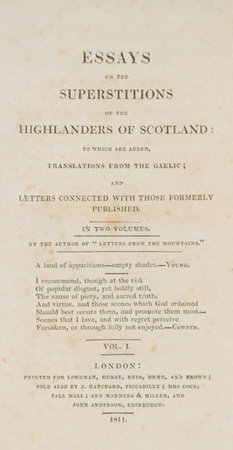 [GRANT, Anne]. ~ Essays on the Superstitions of the Highlanders of Scotland: to which are added, Translations from the Gaelic; and Letters connected with those formerly published. In two Volumes... London: [J. Hay & Co. Edinburgh] for Longman, Hurst [and others] and John Anderson in Edinburgh, 1811.

First edition. Essays on the Superstitions of the Highlanders found favour among readers with a taste for the poetry of Burns and Scot, as well as among Romantics who looked to the Scottish Highlands for evidence of a society uncorrupted by the vices of modern society. Anne Grant was born in Glasgow, but spent her childhood in America and is best known for her Memoirs of an American Lady (1808).